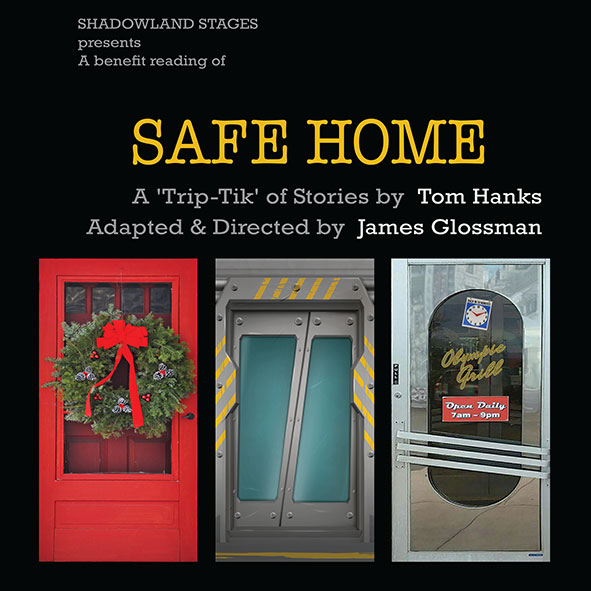 Please join us on Saturday, September 25th at 8pm for a world premiere benefit reading of SAFE HOME, a new play adapted and directed by James Glossman from three stories by Tom Hanks. 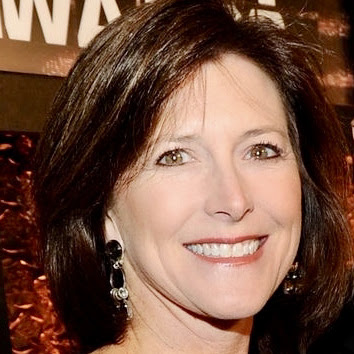 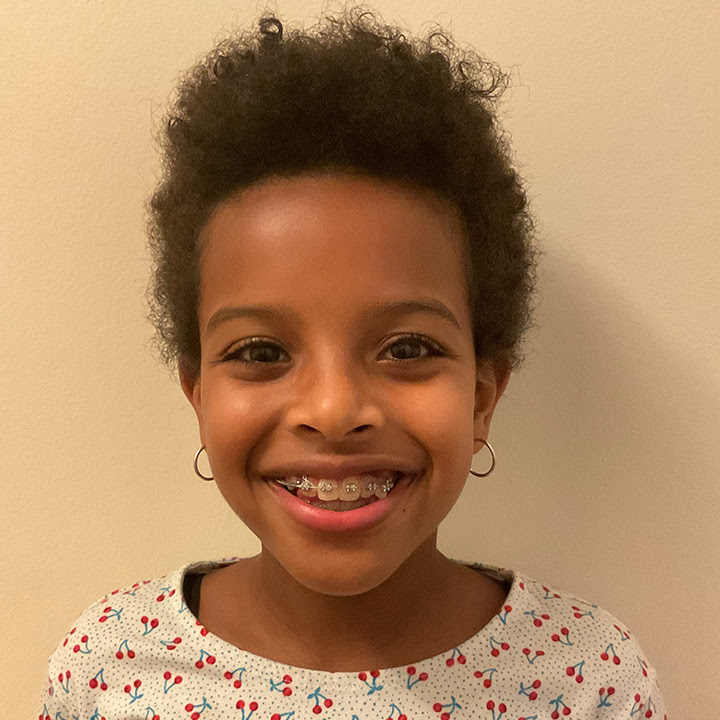 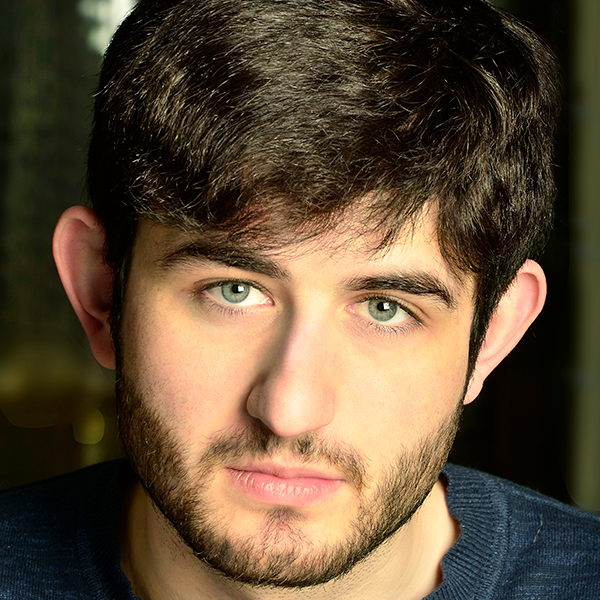 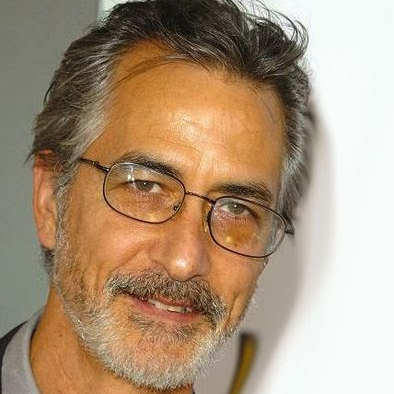 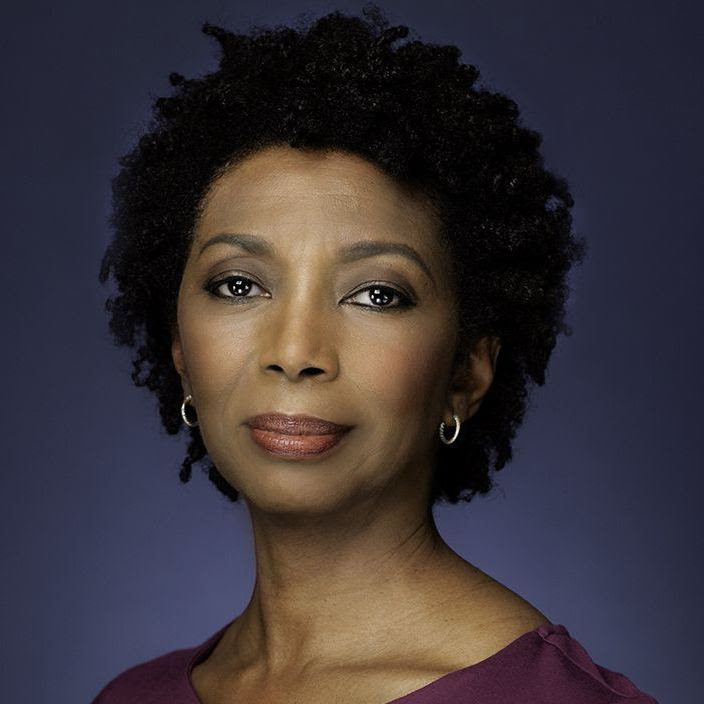 In “Christmas Eve, 1953,” WWII vet Virgil Beuell heads home across snowy streets to get his family ready for Christmas, while awaiting his annual midnight call from Bud, the pal with whom he lived through
the Battle of the Bulge.

“The Past Is Important to Us” takes us on a wild science-fiction ride, as tech billionaire Bert Allenby pays big to join Chronometric Adventures on a trip through a time portal into the past, looking for love at
the 1939 New York World’s Fair.

And in “Go See Costas,” we go hand in hand with Assan, a good man cast away upon tough times, on his dizzying odyssey to escape Balkan terrors and get himself somehow safely ashore in his hoped-for America.

Join us for this benefit event, as a powerful ensemble of versatile actors creates—with the help of the swinging, soulful music and visual backdrop of images of other days—this funny, scary, hopeful tapestry of stout-hearted travelers all trying to find their way…SAFE HOME.

James Glossman (Adaptor/Director) most recently co-wrote and directed the music-theatre piece Shostakovich and the Black Monk, in collaboration with the multiple-Grammy-winning Emerson String Quartet, which has performed around the world from the Tanglewood, Wolf Trap, and Ravinia Festivals to the Lotte Concert Hall in Seoul with a rotating cast including David Strathairn, Sean Astin, Jay O. Sanders, Richard Thomas, Evie Colbert, Jeff DeMunn, and Len Cariou. His adaptation of Raymond Chandler’s Trouble Is My Business had its world premiere at Portland Stage, following a benefit workshop here (w/David Strathairn and Peter Scolari) at Shadowland. In three decades of collaboration with writer and journalist Jim Lehrer, Glossman adapted & directed Lehrer’s novels Kick the Can, The Special Prisoner (w/William Schallert) and Flying Crows; directed his play The Will and Bart Show; and has been developing Lehrer’s final play, Glock. For Shadowland, he most recently directed the American premiere of John Cleese’s new farce Bang Bang! (w/Sean Astin & Scott Shepherd) and the east coast premiere of Jeff Daniels’ Flint (w/Brendan Burke), and just last Christmas, a Zoom reading of “Christmas Eve 1953” — the first part of Safe Home — with much of tonight’s cast, along with Maryann Plunkett and Jay O. Sanders. Over this past year, Glossman has directed productions written for Zoom of Lia Romeo’s Sitting and Talking (w/Wendie Malick & Dan Lauria), Ken Weitzman’s Fire in the Garden (w/Sean Astin), and Nicky Glossman’s Portrait of a Woman in Repose (w/Paula Prentiss & Tony Shalhoub).

The extraordinary artists donating their talents to this benefit reading include:

Ali Breneman – Ali Breneman is thrilled to be a part of bringing this story to life during this strange, strange year. Her favorite past credits include SHOSTAKOVICH AND THE BLACK MONK with the Emerson String Quartet, David Strathairn, and Jay Sanders, the indie feature film “Nesting Dolls”, “Living on Love”, and “Young Frankenstein” (Inga). Though she is currently in medical school at Columbia University, theater always has been and always will be a part of her life. She would like to wish everyone health, happiness, and safety as we ride this out together.

Evelyn McGee Colbert is thrilled to be working with Jim Glossman again. She last appeared in his music-theatre piece, Shostakovich and The Black Monk, with the Emerson String Quartet (and David Strathairn), in concert halls from Tanglewood and Wolf Trap to Seoul, South Korea. McGee Colbert is a graduate of the University of Virginia and the Circle in the Square Theater School. She currently serves on NJ Governor Phil Murphy’s Restart and Recovery Commission and is also a founder and President of the Montclair Film Board of Trustees. She is also an independent film producer and and the Vice President of Spartina Productions, a production company that she co-owns with her husband, Stephen Colbert. Evelyn and Stephen are executive producers of “Derek DelGaudio’s In & Of Itself,” currently on Hulu.

Alex Glossman – Alex Glossman is thrilled to be back at SHADOWLAND STAGES, where he had the privilege of playing Ken in John Logan’s RED. Alex has also appeared in LIVING ON LOVE (Seven Angels Theatre), PLAIN AND FANCY (Round Barn Theater), and SHOSTAKOVICH AND THE BLACK MONK alongside the Emerson String Quartet (All Over the World). Be well and enjoy the show!

Leyu Girma – Leyu Girma is 11 years old and she lives in South Orange, NJ. Her recent performances include being a part of a stage reading of Jim Glossman’s adaptation of THE DOOR INTO SUMMER by Robert Heinlein alongside Stephen Colbert and other established actors. At Farbrook School (Short Hills, NJ) she read the part of King Lear in THE TRAGEDY OF KING LEAR, performed as a messenger in THE CHILDREN OF HERAKLES and played the hippo in the adaptation of the Blue Faience Hippopotamus (all adapted and produced by Jim Glossman). She performed the part of a fairytale character in the musical SHREK at South Orange Performing Arts Center in South Orange, NJ (with Class Act Studio).

David Strathairn – Often recognized for his role as CIA Deputy Director Noah Vosen in the 2007 film “The Bourne Ultimatum” (a role he reprised in 2012’s “The Bourne Legacy”), David Strathairn also played Dr. Lee Rosen on the Syfy series “Alphas” from 2011 to 2012 as well as Secretary of State William H. Seward in Steven Spielberg’s film “Lincoln” (2012). He won an Emmy and was nominated for a Golden Globe for his role in the TV film “Temple Grandin” (2010), and was nominated for an Academy Award for Best Actor for portraying journalist Edward R. Murrow in “Good Night, and Good Luck” (2005). His many theatre roles include
REMEMBER THIS : THE LESSON OF JAN KARSKI (Laboratory for Global Performance and Politics, Georgetown University), UNDERNEATH THE LINTEL, SCORCHED, THE TEMPEST, CHESTER BAILEY (ACT/SF), HAPGOOD (Lincoln Center NY), THE BIRTHDAY PARTY, MOUNTAIN LANGUAGE (CSC NY), and performances on Broadway in SALOME, DANCE OF DEATH, and THE HEIRESS.

Sharon Washington – Sharon has recently been seen in Todd Phillip’s “The Joker” with Joaquin Phoenix, Andrea Berloff’s “The Kitchen” with Tiffany Haddish, and “On The Basis Of Sex” with Felicity Jones. Television viewers may recognize her from her recent guest star appearance in the final season of “Madam Secretary”. Other film appearances include “The Bourne Legacy”, “Michael Clayton”, “Freedomland”, “The School of Rock”, “The Long Kiss Goodnight”, “Malcolm X”, and “Die Hard With A Vengeance”. Recently Sharon added playwright to her resumé, writing and performing her solo play FEEDING THE DRAGON which received its world premiere at City Theatre in Pittsburgh followed by a successful run Off-Broadway for which she was nominated for an Outer Critics Circle Award for Outstanding Solo Performance, a Lucille Lortel Award for Outstanding Solo Show, and won an Audelco Award for Solo Performance. On Broadway Sharon appeared as The Lady in the critically-acclaimed musical THE SCOTTSBORO BOYS by Kander & Ebb directed by five-time Tony Award winner Susan Stroman. Other Off-Broadway credits include roles in DOT at the Vineyard Theatre, written by Colman Domingo and also directed by Susan Stroman; WHILE I YET LIVE by Billy Porter at Primary Stages; LUCE by JC Lee at Lincoln Center Theater (LCT3); and WILD WITH HAPPY also by Colman Domingo at the Public Theater for which she received a Lucille Lortel Award nomination and an Audelco Award. Sharon has worked many times on the New York Shakespeare Festival stage including playing Lady Anne to Denzel Washington’s Richard in RICHARD III and Valeria to Christopher Walken’s CORIOLANUS; as well as in the award-winning adaptation of CAUCASIAN CHALK CIRCLE directed by George C. Wolfe.